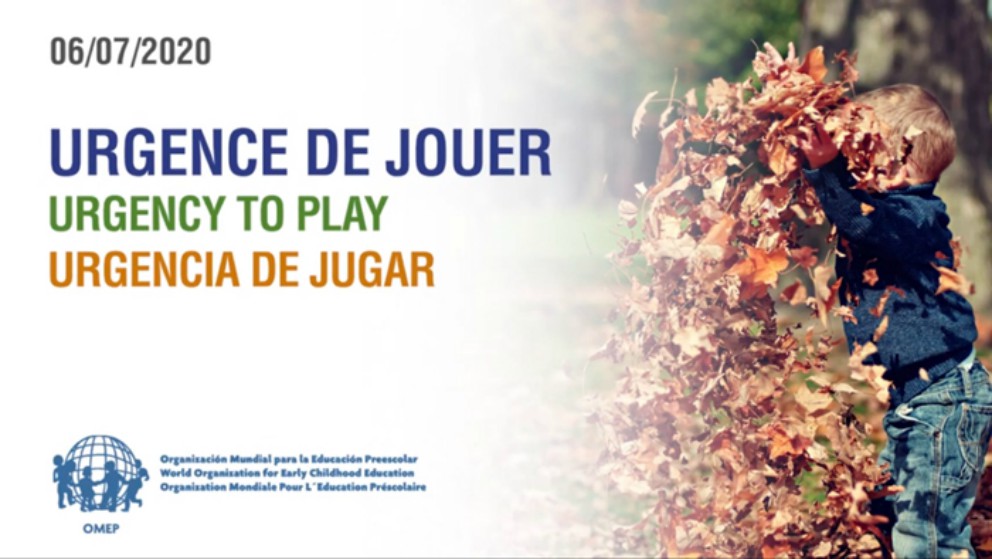 After several weeks of confinement the children return to kindergarten. They will find their environment transformed because of the health measures put in place to combat the COVID-19 pandemic. Adapting to such important changes causes an emotional overload in children that can lead to stress.

As many elements of the situation are anxiety-inducing, it is important to be concerned about classroom play, not only as a means of learning, but also and above all as an antidote to stress, as a safety valve as Elkind envisioned.

Research with children who have been confronted with traumatic events – wars, migration, disasters, serious illnesses – has shown the invaluable role of the game for their resilience and its saving force. Let’s remember with  Winnicott to do what is necessary for the children to play, it is a psychotherapy in itself.

We therefore invite teachers to proclaim a pedagogical urgency: to bring the game to life in the classroom at kindergarten.

In the current context, children are asked to follow health measures that involve maintaining a physical distance between them and avoiding sharing equipment or toys. The symbolic game is based on social interactions, How then is it possible for them to play in these conditions?

Considering the importance of keeping play in preschool classes, we want to highlight what is still possible to do rather than what has become impossible. In particular, in the imitation game, the child adopts a role and creates a scenario. This game is still possible since the child can use speech to interact with other players. For example, two children can play cooks  remotely, each with their own equipment, while talking and pretending to share imaginary material.

The fictional game is also still possible. This game leads the child to play the role of a director and invent a story with figurines. The plays by explaining to himself what his characters are doing and making them talk. Simply from small pieces of paper, pencils or erasers, the child creates his game universe through substitution. We invite the teachers to propose to each child a set of figurines and polyfunctional objects that will lead him to make many substitutions and develop his imaginary world.

The substitution that has just been discussed, which is the act of replacing an object, a person or an action with something other than what it is, allows to develop the symbolic function that characterizes the game. To promote substitution in children, adults can present an object and make the children turn it “in their head” into another object. For example, a scarf can become a snake or a jump rope.

It is also possible to use children’s literature. It’s about reading a book with the kids and showing how one or more characters use substitution. Several children’s books put the latter into practice. For example, a character can turn a cardboard box into a house, a car, a cave, etc. After reading, the adult and the children can substitute the object of the book, which is very interesting for them.

It is also important to mention that the word occupies a place in the symbolic game and that it can be used with children. Indeed, without being in the real action of a game, with the help of the adult, children can order events, predict events, imagine the unfolding of a complex scenario and, finally, turn a game into a story. Even if the game itself does not take place, it is important to know, as the teacher Raymonde Caffari-Viallon says, that “when you have prepared everything, imagined everything and said everything that will happen, it is no longer necessary to play the game”. The satisfaction and happiness of the game will still be there.

In a guide for teachers we propose concrete activities  that allow us to maintain the daily period of symbolic play in the classroom while respecting the health measures. We recognize, however, that nothing can replace free play, but we hope that the ideas on offer will help keep the spirit of the game alive in the classroom and encourage children to imagine, dream, verbalize and finally “play in their heads” while waiting for the moment when they can pretend again… for real.

Participation of the OMEP World President in the UNESCO Seminar: “Ensuring the Quality of Learning and Well-being of young children in the Context of the COVID-19”